Filipino Nurses in the USA � Yesterday and Today 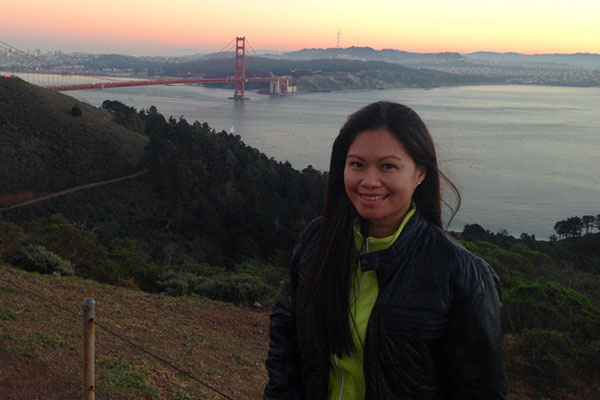 Rosario May Mayor (pictured right) at PNAA conference.[/caption]Rosario May Mayor arrived in New York City one cold morning in March 1971, a 22-year-old with adventure in her veins,� yearning to experience the America portrayed in the television shows and movies she had watched while growing up in the Philippines. The draw was a different setting, a different country with lots to offer�opportunities for education, travel and to be independent,� she recalls.The young immigrant nurse took full advantage of all those opportunities. Over the years, she grew to become a top nursing professional and a national leader. Today Rosario May Mayor, MSN, RN, is retired but served as a leading healthcare consultant to Metropolitan Jewish Health System and as a health systems specialist to the director and chief of staff of the Bronx VA Medical Center. She also served as president of the Philippine Nurses Association of America (PNAA).Mayor is one of thousands of nurses from the Philippines who migrated to the United States in the 1960s and �70s and became an integral part of the health care system here. For decades the Philippines were the number one source of foreign-trained nurses in the U.S., and the trend has continued into the 21st century. In 2005, out of the 21,500 foreign-trained registered nurses who sat for the Certification Program Nurse Qualifying Exam, administered by the Commission on Graduates of Foreign Nursing Schools (CGFNS), 55% were educated in the Philippines.Today, as a severe nursing shortage grips the U.S. health care system, a whole new generation of Philippine nurses is coming to America to seek educational and career opportunities unavailable in their homeland. This newest wave of immigrant nurses faces a more complex health care system and stricter immigration rules than their counterparts of 30 or 40 years ago. But many of the challenges of adjusting to a new culture, as well as the drive to seek a higher standard of living, have hardly changed at all.

A Historical Perspective of Philippine Nurses in the USA

A PassportUSA recruit at Universal Studios, Orlando, FL.[/caption]The former colonial relationship between the United States and the Philippines laid the foundation for the mass migration of Philippine nurses to this country in the latter half of the 20th century, according to Catherine Ceniza Choy, associate professor of ethnic studies at the University of California, Berkeley, and author of Empire of Care: Nursing and Migration in Filipino American History (Duke University Press, 2003). Before the Philippines became independent in 1946, the United States sponsored nurse training there, including the study of English, that was comparable to the work culture and training of nurses in America.The first big wave of nurses from the Philippines came after 1948, as part of the Exchange Visitor Program. This program allowed people from other countries to come to the U.S. to work and study for two years to learn about American culture. Originally the program didn't target the Philippines or nurses specifically but was created to combat Soviet propaganda during the Cold War by exposing foreigners to U.S. democracy, Choy explains. But because of the strong relationship between the two countries, a large percentage of the exchange visitors came from the Philippines, and many of them were nurses.With the cycle of nursing shortages after World War II, the exchange program became a recruiting vehicle for U.S. hospitals. Many Philippine nurses hired through the program had positive experiences, but some nurses were exploited, Choy says. Because the exchange program was intended as a learning opportunity, nurses were paid stipends instead of full salaries. But in some instances, hospitals used the program simply to fill positions and gave the most unfavorable shifts and jobs to the exchange visitors.Another big upsurge in migration from the Philippines occurred after 1965, when U.S. immigration laws�which had favored northern European countries�were changed, allowing more people from the Philippines and Asia to immigrate. The new law also allowed nurses to come here on tourist visas even without prearranged employment, says Reuben Seguritan, JD, a Filipino American attorney who is general counsel to the PNAA.Meanwhile, entrepreneurs in the Philippines set up more nursing schools to meet the demand, and the number of nursing graduates soared. In the 1940s there were only 17 nursing schools in the Philippines, compared to 170 in 1990 and more than 300 today, says Choy.

A PassportUSA therapist and her family experience their first U.S. snowfall.[/caption]American life and culture have undergone many changes since the days when Philippine nurses of Mayor's generation migrated to the United States. But even though Motown, disco and All in the Family� have given way to rap music, iPhones and Facebook, many of the challenges that confront newly arrived nurses from the Philippines aren't all that different today. One of the biggest difficulties is simply adjusting to a new environment and cultural landscape.The weather was cold,� remembers Josephine Villanueva, MA, RNC, associate nurse executive and chief nurse at the VA Long Beach Healthcare System in California, who first came to the U.S. in the 1960s as part of a student nurse exchange program between the University of the Philippines and the University of Kansas. She arrived on a frigid day in January. Our American roommates met us at the airport and said, �Let's go to Dairy Queen and have ice cream!'�Like many other new arrivals to the U.S., Villanueva had to adjust to the nuances of American culture. For example, she says, Americans are more independent than Filipinos, whose lives are more centered around family. The Filipino culture values sensitivity and gratitude, while Americans are more frank.Language differences are another source of culture shock. Even though nurses trained in the Philippines speak English, they often have trouble deciphering the varied American accents and idiomatic expressions. Villanueva recalls looking out the window in alarm one day when a roommate said it was raining cats and dogs.� She laughs when she remembers puzzling over a store clerk offering her a rain check� coupon.Some newcomers from the Philippines working in U.S. health care facilities feel embarrassed to talk and ask questions, says Cheri Nievera, BSN, RN, a staff nurse in the cardiothoracic ICU at Barnes-Jewish Hospital in St. Louis. Homesickness can be a problem, too, she adds. Emotionally it's very challenging being alone and away from their families.�Many PNAA chapters offer mentoring programs and acculturation classes to help these new immigrant nurses make a smooth transition into American life. In the 1990s, the New York chapter collected turtlenecks, jackets and other warm clothing for nurses who had just arrived and were not prepared for the difference in climate. The chapter also sponsored a seminar called Managing Effectively in a Different Environment,� a program Mayor would like to resurrect during her term as president of the national association.In 2000 Nievera coordinated an initiative at Barnes-Jewish Hospital called Bridge to the Pacific� to ease the transition of new cardiology nurses from the Philippines. The project came about after concerns were raised publicly about the new Filipino nurses' educational background, clinical competency and communication skills. Nievera traveled to the Philippine Heart Center in Manila to meet with the nursing director, educators and staff and review standards of care, treatments and equipment. She learned that the nurses there met rigorous qualifications, administered the same medications and treatments as their U.S. counterparts and met comparable standards of care. The equipment was older, but the nurses treated the same conditions, she says.Nievera reported back her findings to put the concerns at rest, and her insights were used to shape the orientation and cultural integration of the new nurses. She also worked with the St. Louis chapter of the PNAA to send needed equipment back to the Philippine Heart Center.

Adjusting to the U.S. lifestyle often means purchasing one's first car.[/caption]While some of challenges faced by immigrant nurses from the Philippines are the same now as they were 20 or even 50 years ago, others are relatively�new. Today's new arrivals encounter a much more complex work environment than that of a generation ago, including new high-tech equipment, paperless records, increased regulation, utilization review guidelines and new disease management concepts, to name just a few.There are also more barriers to immigration. These days, foreign-educated RNs applying for an occupational visa must obtain a VisaScreen certificate. This certificate is issued by the Commission on Graduates of Foreign Nursing Schools, an international authority on credentials evaluation of health care professionals worldwide.The VisaScreen is an immigration requirement, not a license to practice in the United States. It determines whether the nurse has the equivalent of a U.S. license and education, can speak and write English adequately and has adequate medical knowledge. To get the VisaScreen, nurses must pass either the CGFNS certificate exam or the National Council of State Boards of Nursing's NCLEX exam.

As times and technologies change one thing remains clear, Filipino nurses are welcome and needed in the USA.

Published with Permission from MinorityNurse.com. Certain portions of the original article have been omitted. The full article may be read on�MinorityNurse.com.Get started on your #AmericanDream by registering with PassportUSA today. 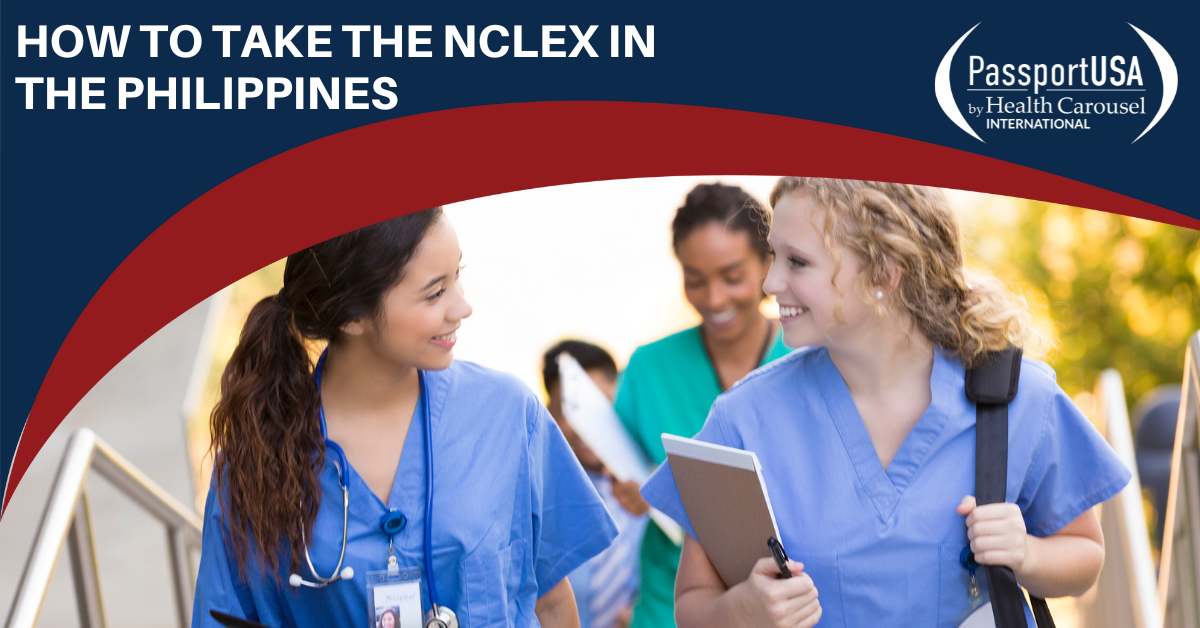 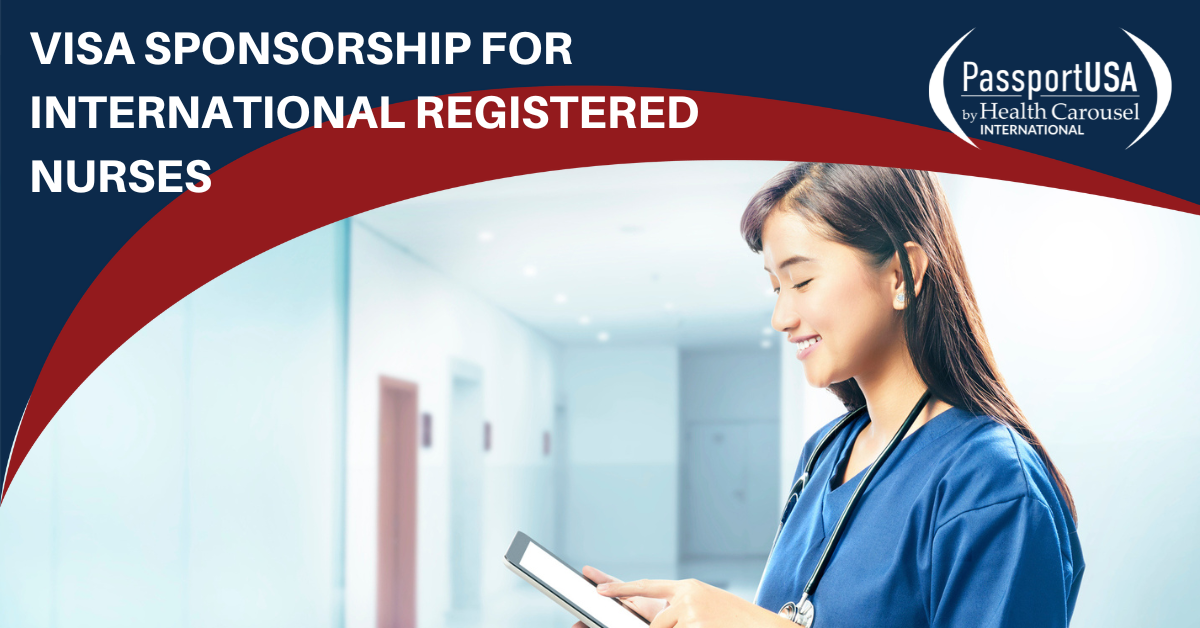 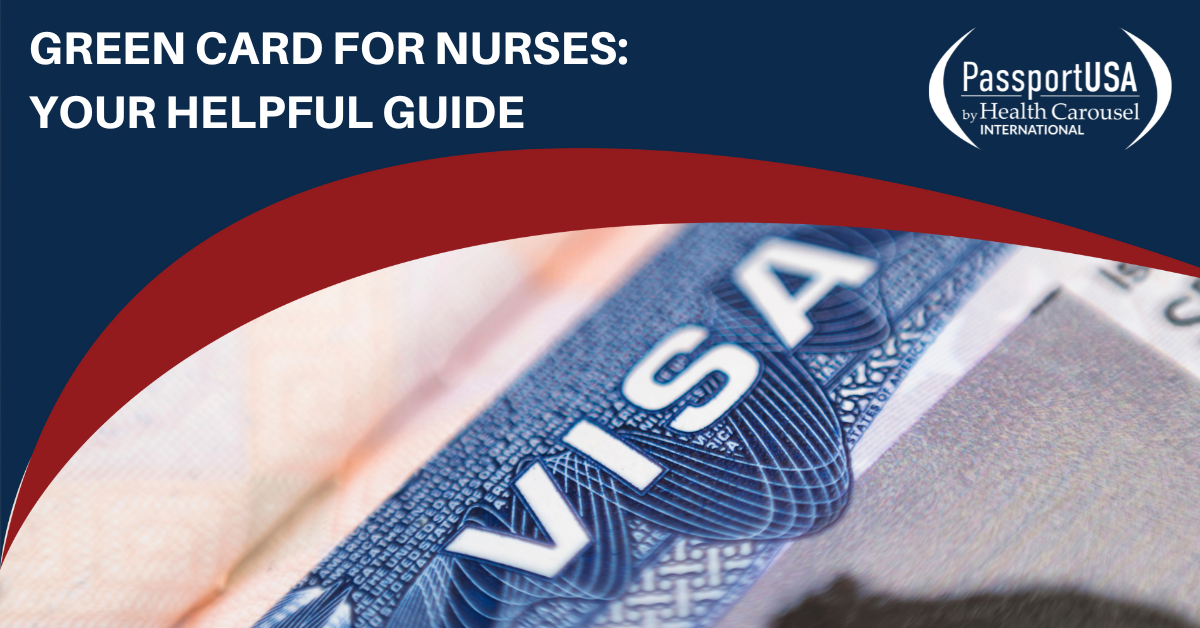 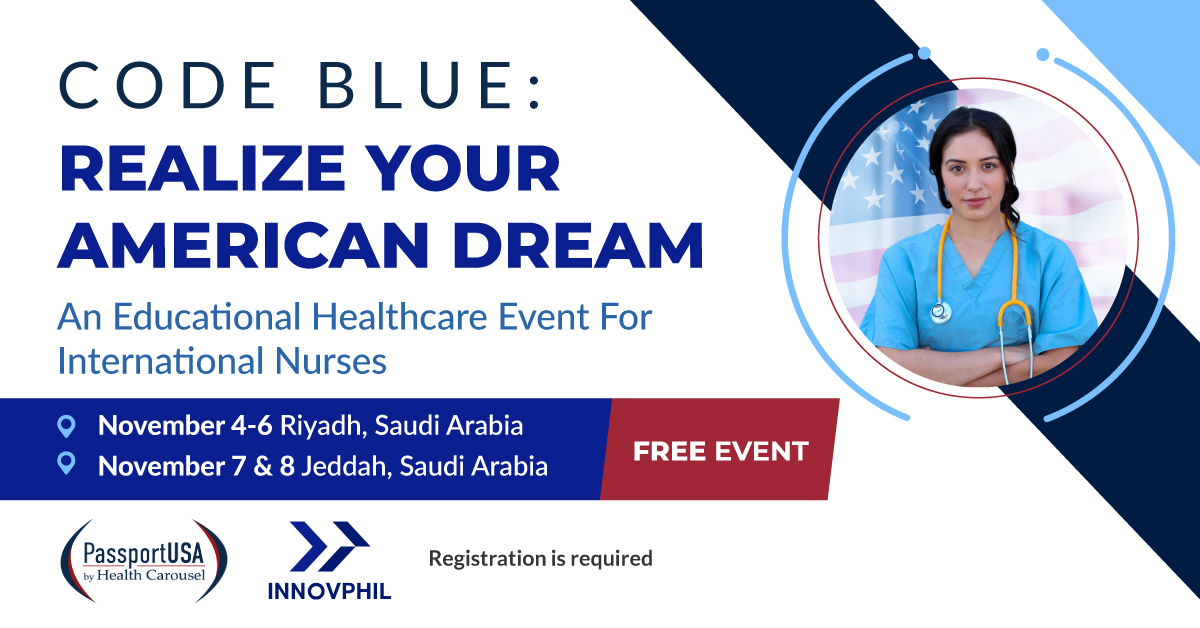 Guide to Taking the NCLEX in the Philippines | PassportUSA 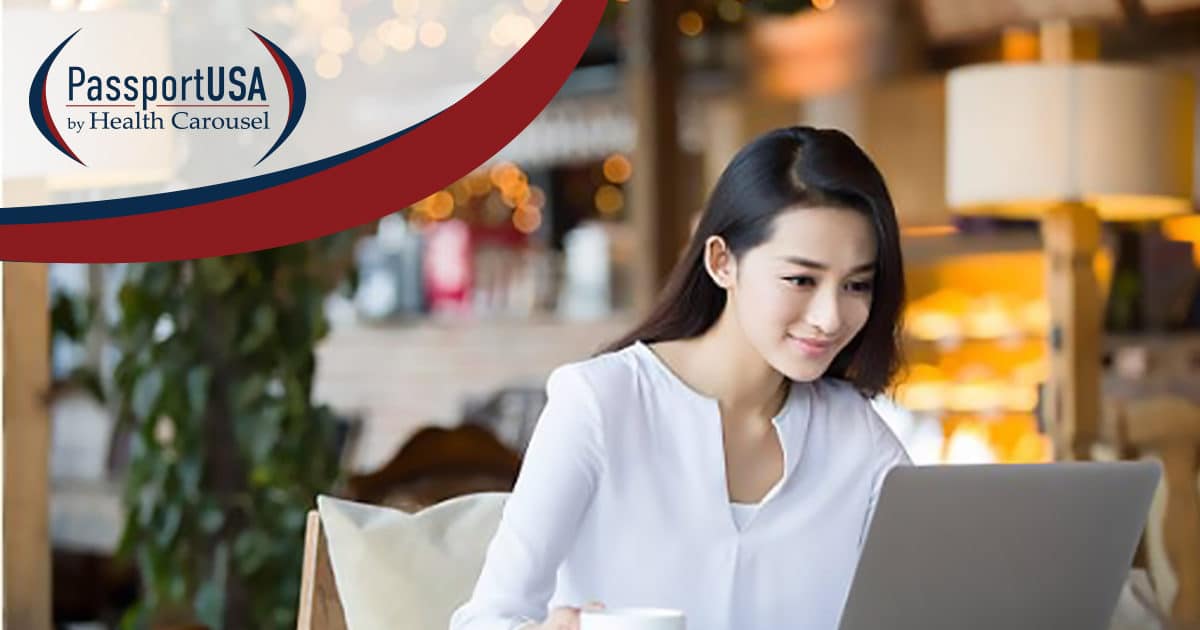